Skip to content
Members Only Login
You Are Here: Home » Latest News 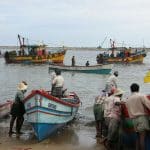 BRUSSELS, BELGIUM – 26 April 2017 – After more than a year of preparatory consultations with leading seafood industry actors around the world, the Global Dialogue on Seafood Traceability has launched a web-based platform for companies to join the Dialogue’s collaborative process to adopt voluntary standards and guidelines for interoperable seafood traceability systems, according to an announcement made today on the floor of the Seafood Expo Global (Booth 8-4769).

The Dialogue is being initiated to confront a long-standing problem in the seafood industry—the absence of an accepted technical framework to align proprietary seafood traceability systems and to guide the harmonization of emerging national traceability standards. If successful, the Dialogue will enable dramatic improvements in efficient, and flexible seafood traceability, allowing business and regulatory systems around the world to work together smoothly. Major brands from throughout the supply chain in the Americas, Africa, Europe and Asia have already applied to participate.

“Companies around the world have been looking for ways to lower costs and improve access to reliable seafood traceability without getting trapped into inflexible proprietary systems,” said David Schorr, senior manager of WWF’s Transparent Seas Project. “As other globalized industries have found, the key is a framework of voluntary global traceability standards. That is what the Global Dialogue seeks to deliver.”

Traceability has long been recognized as essential to ensuring seafood health and safety. Now, it is also increasingly necessary for meeting sustainability commitments, combatting illegal, unreported, and unregulated (IUU) fishing, and reducing other supply chain risks (including, for example, the elimination of slavery at sea). Every year billions of Euros worth of illicit and fraudulent seafood makes its way onto store shelves and restaurant tables—often despite the efforts of the legitimate actors who make up the vast majority of the industry. Consumers are increasingly demanding to know the origins of their seafood, and governments in the EU, US, and elsewhere are now demanding proof that the fish products entering their markets were legally produced.

Companies can register for 2-year dialogue on new voluntary standards

Over the past 24 months, dozens of major seafood industry actors have met at a series of workshops convened in Asia, Europe, Oceania, and the Americas by the Global Food Traceability Center and WWF to set the agenda for a two-year traceability dialogue process. Moving forward, the Dialogue will utilize its online platform to facilitate virtual and face-to-face meetings of working groups tasked with designing a new voluntary seafood traceability framework.

Schorr added, “Knowing where fish products come from is key to smart procurement of seafood and the only route to an effective global traceability network is through industry. The seafood sector will drive this conversation; we’ve just built the infrastructure for them to get on their way.”

“The transition to digital traceability is inevitable,” said Tejas Bhatt, Acting Vice President, Science and Policy Initiatives for the Institute of Food Technologists, which runs the Global Food Traceability Center. “This is already happening in other food sectors as well as in other industries. Our expectation is that the Global Dialogue will enable the private sector manage this change effectively and efficiently on a pre-competitive basis.”

The Dialogue’s website will be accepting participant applications through the end of June. Organizers will host a technical workshop in Bangkok, Thailand next week followed by an informational meeting during the SeaWeb Seafood Summit in Seattle, Washington this June.

About the Global Dialogue of Seafood Traceability (GDST)
The GDST is an international, business-to-business platform established to advance a unified framework for interoperable seafood traceability practices. The Dialogue brings together a broad spectrum of seafood industry stakeholders from across different parts of the supply chain, as well as relevant civil society experts from diverse regions.